The nerves were running through my body so intensely I actually felt sick. That was the feeling I had on the journey to camp. As I arrived at Bhejane Nature Training I had could tell that this year was going to be one to remember, and I was right!

Never in my life did I ever expect to be in a place of natural beauty like this. As I was given a walk around, I met some people, like Rupert, Ryan, Khyle and Jay. I remember them because they were the first people I met and became friends with! I was still uneasy about being at camp because I didn’t know anyone and it was weird. I guess it was because I was in a new environment and felt uneasy about being here. As the next few days went by, I got to know some people better! On the first night of induku I met everyone else, Zee, Gerry, Derek etc! I got along with them very well!
Over the next few weeks we had many long and agonising lectures but they were of importance and I took as much as I could out of it. During out terrestrial level 1, we had the most amazing opportunity to go to Zulu Croc and wrestle crocodiles out of the water and sex them! Never in my life did I ever have that train of thought that I would be doing such a thing. It was something I only saw on television not in real life and actually doing it. It was one of the most amazing experiences I have ever done thus far! The lectures we had over the next few months showed how important they were when we had to go and stay at Mkhuze game reserve to do our level 1 practicle. All that we had to do was guide in the vehicle in front of Dylan Panos, I will not lie I was nervous, I had no idea what to expect but the lessons I had received from Ryan Tippet and Nick Van De Wiel was now evident in what I relayed back to the group. 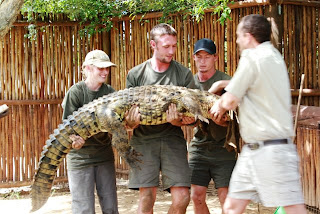 Our next part of the course was Marine guiding with Freya Van De Wiel, this was an experience on its own. We had to do our PADI open water and I have to say my mind was absolutely blown when I went down into the ocean for the first time. Something that was a new experience and I absolutely loved every second of it. I thought that I belonged down at the bottom of the ocean with the fish and corals. We also had the opportunity to go to Kosi bay and to the kosi mouth estuary, that was another experience that you had to do for yourself. 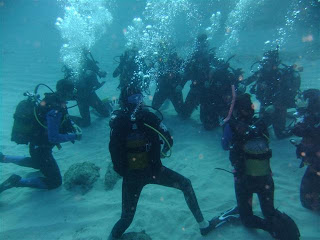 As the months moved by I got to know everyone so much better and eventually was friends with everyone, we all loved to have a great time together without having any troubles.

My next section of the course was trails, and now that was an amazing experience, walking in a reserve with a high calibre rifle looking for dangerous game! Wow, what a thrill indeed. Before we could walk on trails we had to do our ARH (advanced rifle handling), which is a set of drills that has to be completed before a set time and we use a high calibre rifle. This was the first time I have ever discharged a firearm and the adrenaline after shooting rifles and doing those drills is somewhat mind blowing because for someone that has never shot a rifle before and having to do ARH was an incredible thing to achieve, something that I thought I could never be able to achieve. On trails we walked far, I mean very far just to find dangerous game for our encounters, but to be able to get within 20m of elephants, buffalo and rhino is something I cannot describe. The adrenaline pumps through your veins as you watch these animals knowing that at any moment, things could go terribly wrong! That is a thrill on its own. 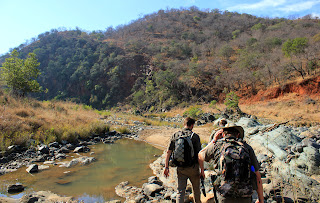 Our next part of the course was conservation principles and ethics, this part to me made me understand conservation a whole lot better, taking a look at how we should manage a reserve and manage a biome in a reserve. It is a difficult task because we had no idea how to do it, but through experienced guidance we learnt a great deal and can now put it all into perspective.

So I would have to say that in the year of 2012, I had no idea that I would change this much, do what I thought was impossible and to be able to say that I have my niche which is field guiding in its entirety.

Creating Awareness Through Wilderness...
Posted by Bhejane Nature Training at 23:30