Posted by Christa Panos at 05:13 No comments:

Good day walking trails today. It started with us finding tracks of an elephant herd, and whilst assessing how fresh the tracks were, we found the track of a white rhino bull on top of the elephant tracks. The Rhino tracks were fresh and he was clearly on a mission, leaving scraping and urine along his trail.
Warwick, took the trail as our tracker, with Quintin his lead rifle, watching ahead. I followed as second rifle, giving them space to work. We soon found the bull at a midden and could see that he was very excited. His head was down sniffing close to the ground and his tail was curled. We soon found more rhino tracks leading away from the midden, and this is why the bull was so excited. We decided to let him lead us to the other Rhino, so followed his tracks, but gave him enough distance in order not to disturb him.

Lisa took over the tracking, and walked head up, looking well ahead as she trailed the Rhino bull. It was great to see what the bull was doing by looking at the evidence left in his tracks. Good lessons were learnt and students for the first time saw the Rhino lips leaving scuff marks on the trail, as he followed the other rhino tracks.
He caught up to the two rhino's he was following, and we could see that it was a cow, and a sub-adult calf. The cow was not too happy and ran into the thick bush with the bull following. We decided not to follow them.
En route back to camp, Whitney and Brian took over as 1st and 2nd RIfle and we encountered a herd of buffalo. We all had a great day learning and doing what we love! 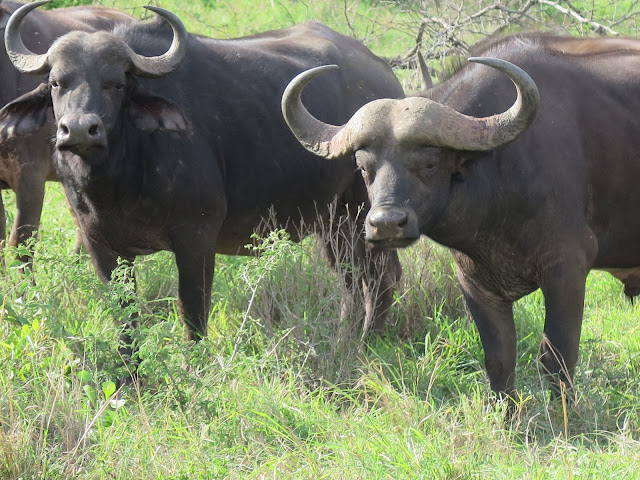 Posted by Christa Panos at 01:30 No comments:

A report on the Bhejane Nsele's week  - Antelope, Birding and Frogging in winter!

This week Hluhluwe got exceptionally good rain, which allowed the Nsele students to see some awesome things coming to the water and being more active during this winter month.
On Ethlatini property some frogs were very happy after the rain that we even found Knocking Sand Frogs mating and Boetterger’s Caco’s singing every night. The birds were enjoying the early mornings more too. While walking with Richard Mckibben on Ethlatini we got sightings on the Klaas’s Cuckoo, Hamerkop, Purple-banded Sunbird and many more. We also had a quick glance on two Southern Reedbuck and some ostriches.

We then also went on an afternoon walk at Amorello’s where we got sightings on the very small, but fast moving Grey Penduline Tit and the Cardinal Woodpecker with its call that can be confused with the White-eared Barbet. We did some tracking on Grey Duikers which through us all off our feet with the muddy substrate and the displaying of their hooves. We ourselves then went on a muddy exploration along the Kingfisher Alley River on the property, collecting mud and shells to our shoes. We also found a huge amount of Leopard scat on the mud close to the water which was astonishing.
During the week all students delivered well-prepared Antelope Presentations which we all enjoyed thoroughly and we learned quite a lot of new things. Well done Nseles!

On Thursday we went to Mkuze Game Reserve and got sightings on many Cape Glossy Starlings, a female Black-backed Puff Back, a Striped Kingfisher warming up in the morning sun which allowed us to get pretty close for some fantastic photos, the Marico Sunbird, Little Bee-eaters and a descent and clear sighting on the African Goshawk at one of the hides. The drive ended very shortly after due to many road works in the reserve, so we went on a quick walk through the forest just outside the gate of the reserve. Here we had sightings on the Black-throated Wattle-eye, Orange Breasted Bush-shrike, Paradise Flycatcher, Yellow-streaked Greenbul and terrestrial Brownbul. Arriving back at camp for a Boerewors Braai for lunch was an excellent way of ending the day while struggling on Elephant photos to ID and left us all mind-blowing.
Thanks to Richard and Candice Mckibben for the spectacular week. We are frothing to see you next time!


By Schanita Schoeman
Posted by Christa Panos at 08:31 No comments: