Doing Trails in Zululand is always a time of year to look forward to.  The many different environments and the different challenges presented by each, ensures that teaching trails always remain a challenging and exciting prospect for myself as the instructor as well as the students.
Zululand has got a long history of wilderness trails, with the first official Natal Parks Board wilderness trail being undertaken by Dr. Ian Player and Magqubu Ntombela in 1959 into the Imfolozi Wilderness Area. This was the beginning of something very special in the annals of wilderness hiking. (Wilderness Leadership School) This was the first wilderness trails to be run in South Africa and since then many people have found in them an opportunity to reconnect and experience nature, as man would have done many years ago. It is a special privilege to be able to continue this practice in Zululand today, and to introduce students to the Zululand conservation legacy.

When I got home after the recent May trails practical, I sat down and started taking off my hiking boots.  They had taken a beating over the last four weeks, and were showing evidence of the many kilometres walked.  We had just completed a Trails Guide Course with a group of Bhejane Students  and have walked well over 200km and logged total of 150hours in dangerous game areas.
The group spent time walking in 4 different dangerous-game reserves in Northern KwaZulu Natal.  In addition to the Big 5, most of the reserves are also host to good populations of Black Rhino – a flagship species for this region.  Walking in different reserves allowed the students the opportunity to learn to walk trails in areas with different topography and habitats that includes mountains, grasslands, perennial rivers, and more coastal sand forest habitats.

One of the reserves where we walk is very well known for its Rhino Conservation and boasts a population of over 110 White Rhino and 30 Black Rhino.  This makes it an excellent venue for teaching students about the life and habits of rhino with an abundance of tracks and middens to stop and interpret.  The group did very well in getting dangerous game encounters.

A total of 51 encounters was logged for the group as a whole, which consisted of the following:

Students are mentored and de-briefed after each encounter, and taught how to handle such encounters professionally. Another important skill for trails guides is learning how to record and log these encounters. This is usually done at the end of the day –catching the last light of the sun, before reflecting around the fire about the challenges and excitement of the day. Below are some of the log book entries for the students in this group.

The morning started off great, we didn’t walk very far before finding fresh buffalo tracks and dung, so we tracked them before deciding to climb a hill to get a better position.  We heard a few animals alarm calling and assumed that the lion whose tracks we had seen following the buffalo was close by.  After a long trek we came to the first dam, but all we saw was a large Kudu bull and cow. We stopped for a break and then continued on to another dam where we found two large dugga boys resting by the water’s edge and chewing the cud.  We observed them for 15 minutes and left them as we found them.  We then trekked through long grass came across a dry riverbed which on inspection revealed another resting dugga boy.  We didn’t want to take any changes, so we backed away and went around him, all the while staying alert as to his position.   After another long trek through tall grass we slowly and quietly made our way to another dam where we found a hippo taking a nap on the banks of the dam. The others had a lunch break while Paul and I watched the hippo and saw a Marsh Terrapin climbing up the hippo’s back-side.  The Hippo got irritated and rushed into the water, where it was inquisitively checking us out until our shift was done . . .

After lunch we and found another dam which had an old buffalo carcass and reedbuck.  Eventually we made it to a section known as Rhino Alley, after following some fresh Rhino tracks, and decided to follow this frequently  used “rhino highway”. We were very vigilant while walking and found many tracks and middens  but no Rhinos.  Once through the path we decided to follow the tracks to a nearby watering hole. On arrival at the watering hole we found nothing but tracks and decided to start heading back to camp.  On our way back we checked a dam we had passed earlier but found nothing there.  When we were approximately 2km from camp, we bumped a breeding herd of buffalo, with fresh dung and tracks all over.  They smelled us and stampeded off, stopping just long enough for us the get a good look at them, before vanishing over the hill.  We continued walking and finally made it back to camp.

Today started very good. We rised early and left the camp as the sun came over the mountains.  We started walking and found fresh buffalo tracks and dung. Ronnie explained how to tell the age of the buffalo by looking at the dung.  We kept on the buffalo tracks and then found  the tracks of a big male lion on top of the buffalo tracks.  The tracks lead us to the river and as we were about to cross the river, the Dugga Boy stood up out of the grass across the river about 20m away. We backed out to the safe open area and walking uphill for about 300m.  We could still see the buffalo bull from the top. As we were watching him, a male lion came out of the bush behind him, but quickly disappeared again.
We then followed another set of buffalo tracks and found another  set of two lion tracks.  We kept tracking them and had to stop when the situation got too dangerous due to thick vegetation. We extracted safely and continued down to the river where we crossed and stopped for lunch.  As we stopped, a herd of buffalo crossed.

After a 150 hours of walking and being on trail, the students returned with new insight on what wildreness trails is and what it means to be a wilderness trails guide. They took the oppurtunity to cultivate a combination of caution and curiosity. The curiosity to lead to an increase in knowledge and to diminish their irritaional fears, yet always be accompanied by the adequte caution. On a frequent basis, trails rangers get exposed to dangerous situations and this calls for having to take calculated risks. A calculated risk where the odds are stacked heavily in your favour, bravado has no space in wilderness! 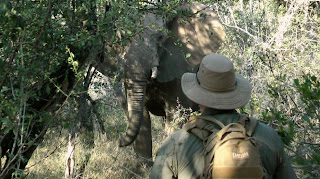