Some time ago I was faced with a decision, to remain in the hustle and bustle of the city or leave it forever for a life in Nature. I decided to leave the world behind and venture into the unknown, to take the leap and turn my world upside down. This meant leaving behind old habits and worn out friends and seeking fresh, new knowledge and experiences. So I went with my heart and chose to enquire at Bhejane Nature Training.
Eager but apprehensive of what I would find there I climbed on a plane to Richards Bay on the 10th of February 2012. Never having visited this part of South Africa, I really was going to an unknown place. I said my farewells knowing that things would never be the same, what an understatement!

The first person I met was Dylan Panos, at first I was very intimidated but from speaking to him saw a man who sat in authority and knowledge (Boss man). When we arrived at Ehlathini, we were greeted with the sight of the ancient sand dunes, False Bay and the mysterious Lebombo Forest. I met Jana, who showed me around the camp. Entering the forest for the first time I felt at peace and my mind fell into a sense of wonder and excitement at being present in this beautiful piece of Nature.

Monday, 13 February 2012. This marks the start of the first term and the commencement of our orientation. We missioned off into the bush on the clues of our wonderful new TA’s to go and get to know the land. This we did, thoroughly, up and down bush, into mud and thorns but we emerged victorious. What I learned on that day is that teamwork would play a large role in the future and that the personality types were very diverse amongst the group.
During this time we got to start knowing each other and forming opinions and first impressions. Friends were made, groups were formed, routines began and time passed. Lectures proved to be highly informative and more than enjoyable, all this new knowledge to apply to life. I learned here that knowledge really is power and 10 000 hours of practice will pay off, thank you for that motivation Nic. A definite highlight of this time would have to be when we went to Zulu Croc and handled live crocodiles, from catching them and subduing them to sexing them as well. I am badly afraid of crocodiles and to touch them and see that they are actually not that bad was a true conquest of fear in my life. 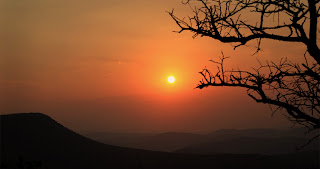 Time flies when you are in the bush and you begin to lose track of the days of the week so this brings me to Tuesday, 10 April 2012. We made our way to Mkuze Game Reserve to go and spend 2 weeks at the Eco Camp with Ryan, Jana, TJ and Ashley. I relate this story because I believe it was a transformative week for everyone. The camp was rustic and took me back to Nature. Every night we would sit around the table playing numerous games of Shithead and building very strong bonds with each other.  False personas began to fall away at this time because nobody had anywhere to run to and we began to see each other in a more genuine way. 2 weeks of drives and the most amazing animal sightings left me feeling tired but content with life.
Monday, 25 June 2012. This sees the day that I was having most stress about, trails. I had a very bad impression of trails because of the rifle component of the course, this soon changed when James Bristow came along. He changed my mind about the use of rifles and I began to feel safer and less afraid to handle them. I was also stressed because the thought of walking amongst potentially dangerous game was daunting. Weeks went by and I practiced a lot with rifles and learnt more and more about trails.

Thursday, 5 July 2012. On this day I shot a .375 calibre rifle. Holy Cow! I didn’t hit any target but the rush of firing that weapon was enough. The most difficult part of this course for me was the Advanced Rifle Handling. Timing and accuracy were tricky for me but I will have that qualification before I leave! 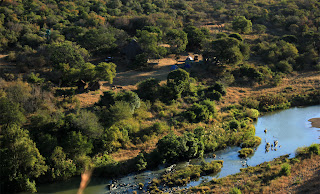 From this point we entered into the real trails experience. My highlight stands out as Ibandla Camp at Amakhosi Private Game Reserve. The location of our camp was unequalled and the fact that we were right next to a river didn’t bother me, even though it was the middle of winter. The walking was amazing and we got fit as hell while enjoying the most pristine areas inaccessible by vehicle. Here we got to know Dylan much better and formed a new respect for what he does, SKILLS!!! The lifestyle we as a group were leading I feel was very beneficial to our growth. We had to cook on fire and go without commodities that we have become accustomed to. Through a certain amount of deprivation I learned a brand new respect for the Bush.

Sitting watch was also an experience I would repeat again. At 3 in the morning the waking world is asleep and the night time creatures come out to play, only that their playtime leaves the hairs on the back of your neck standing upright. Sleeping out in the open air was also the most incredible activity. To go to sleep looking at the stars and waking up to clear, cloudless skies is not something that words can do justice. To hear leopard coughing next to you and lion roaring in the distance is the most intensely emotional experience ever.
A day I will never forget as we were charged by a white rhino. Never will you understand nor conceptualise that feeling unless you were there. It seems that a semi chaos takes over the split second that animal runs, as humans we seek to run away but must not as the first rule of trails is, well you know. Thanks Ronnie for always reminding us that “as jy dom is, moet jy #*&”, very valuable advice!
These are but a few of the many highlights and experiences that I can relate as I bring this tale to a close. I would like to relate a few sayings that have become a part of my new vocabulary:
Bring solutions, not problems!
Awehness!
Don’t run!
Take responsibility for the world around you and your own actions!
Be the change you want to see! 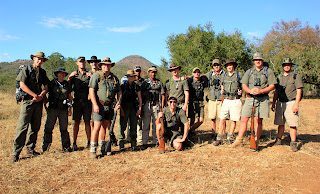 Coming to Bhejane has taught me FAR more than just how to be a guide. I realise now that we have had experiences this year that the average individual will never get to see or feel. We have been taught invaluable facts that would have remained secret if not for coming here. I have been infused with a passion and great respect for this industry. My love of Nature has only been magnified by attending this course. As I said before, this place affects Mind, Body and Soul on many different levels. The changes I have noticed within myself are very real and I believe are permanent. I have learnt to respect my fellow man and to have more patience with the world. I have learnt that there is no rulebook for life and Nature herself, only the rules we as humans set up. I have learnt that we as mankind are not the most important species on this planet and that actually our presence here is hurting more than helping our ecosystem. I have learnt more about the animals of this planet (humans included) than I ever thought I would know. I have seen the healing power of the bush and watched not only me but all my friends change and grow over this year. The scenarios and situations I have found myself in this year have all shaped who I am becoming and I do believe although tough at times this year at Bhejane was integral to my growth as a guide and as a man. Through Bhejane I found confidence in myself and my abilities, saw myself in a very real light overcame numerous obstacles and made some lifelong friends. I never thought for one second coming to Bhejane would do more than equip me with knowledge but yet I encountered a profoundly evolved group of people and some of the deepest psychological healing a human will ever see.
This brings me to a list of names. This list is to mention all the important human factors that shaped my year. To these people I shower blessings for being big influences on my life and helping me to learn very valuable lessons. In no particular order:
Nic Anubis Nicolosi, Rob Neat, Ryan Biza Smart, Megan Modjadji Balouza, Axel Primmer, Dylan Bob Dempsey, Paul Josop, Gerry Jacobs, Graeme Stewart, Craig Bateman, Jean Michau, Derek Jooste, Zee Lemena, Mat Walker, Josie Easton, Emma Ascher, Jay Bell, Rupert Duvenage, Craig Robert Clowes. If I’ve forgotten anyone, THANK YOU to them aswell. I think everyone at Bhejane deserves a thanks.
Secondly, to the people who made this all happen:
Christa Panos, Dylan Panos, Ryan Tippet, Jana Beets, Amon Ndlovu, Nic van der Wiel, Freya van der Wiel, Ronnie Brink, Casper Bester, Mare Louise Bester, Paul Jensen, Hanroe Taljaard, Monica Maroun, Dr Deborah, Tannie Lettie, Oom Pine, Makhosi, Nonto, Dumi, Nellie, Peter.
Your hard work may go unthanked sometimes but we all really appreciate you and the input you have had on our lives.

Posted by Bhejane Nature Training at 23:11