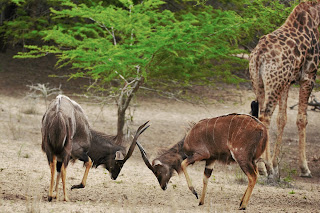 If there is a silver lining to the dry conditions at Makhasa it would be that the harsh conditions allowed us to see animals in a state most tourists don’t get to see them in. The reality may seem harsh, but when you have all the nyala in a reserve congregate around the single water hole you will get to see into the animals’ behaviors and social interactions far more than you would be able to see them on an average game drive.

The most apparent social interaction was a distinct hierarchy while the animals were drinking. The largest male would drink first and chase off any competitors for the limited water. Chivalry is also dead amongst the nyala; every female had to wait to drink until every adult male had his fill. When subordinate nyalas would challenge the system, the male that was drinking, unlike the Care bears, would not tolerate sharing.
The nyala ewes also displayed an eerily human like quality as well. They would approach the male nyalas while they were drinking and pretend to nuzzle them while slowly moving towards the water.  Where have I seen this before?
The drinking hierarchy was also not species limited. As soon as a larger species moved in they would lay claim to the water hole. In this instance it was the giraffes. Being the tallest animal on earth, it is no wonder how they were allowed to drink whenever they wanted. Although it is interesting to note that giraffes are some of the most hesitant drinkers on the planet because, with the exception of when they are born, they are only really ever vulnerable while they drink.

It is hard to stay positive in such situations where it is clear the animals are going beyond their normal behavior due to wildlife management issues, but it is our duty as naturalist to take these times to study the animals and their behavior under such circumstances as to increase our knowledge of the natural world and to, hopefully, one day help fix the problems that plague these ecosystems during times of hardship.