Lara is one of the Bhejane Imvelo students, currently completing her 3rd Year. She is a specialist horse guide and found employment for her practical year, at Ant's Hill in the Waterberg.  Below is her account of a recent game capture operation that took place on the reserve. Well done Lara.

All you can hear is gallopping horses, wild shouting on the radios and helicopter noises.
You immediately know this is not a normal Safari!

This year during the beginning of July Ant Africa Safaris had its annual Game Census and Capture week.
About 30 Guests stayed at Ants Hill and Ants Nest Lodge in the Waterberg, where they had an experience of a lifetime. Each morning the guests and guides swinged themselves into the saddle at about 6 am, after a energy-giving bacon and egg sandwich.

Each day of the week was unique and action-packed.
During the first two days we split up into smaller groups with about 3 guests per guide and seperated into different zones on the beautiful private game reserve.
In each zone we counted all animal species we could encounter. We also made notes of their sexes and condition.
This annual count is vital in order to know if the animals are in good health and striving. It also helps to establish if animals need to be taken off in order to sustain a healthy habitat.
All guests loved the count and we were quite lucky in our sightings: Roan antelope, Sable, Kudu, Eland, Rhino, Buffalo and even some of the nocturnal bushpigs came out! 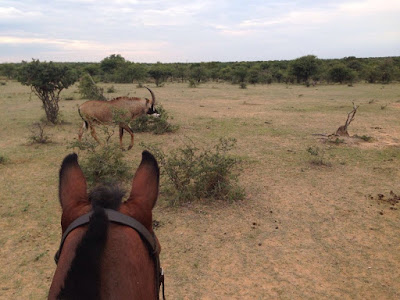 The second day was a little more adventorous: It was time for some young Sable calves to leave the breeding camp and to be relocated.
A troop of about 25 riders went into the breeding camp, where Dr. John, the vet, Anthony Baber, the owner, and a group of strong staff members waited by a game truck.
All riding guests were positioned with a guide in various stragetic posts.
Once the dart went in, everyone kept dead quiet and luckily the sables only ran for a short distance before being out from the tranquilizing drug.
Dr. John did a quick dipping treatment before letting them wake up again in the truck. 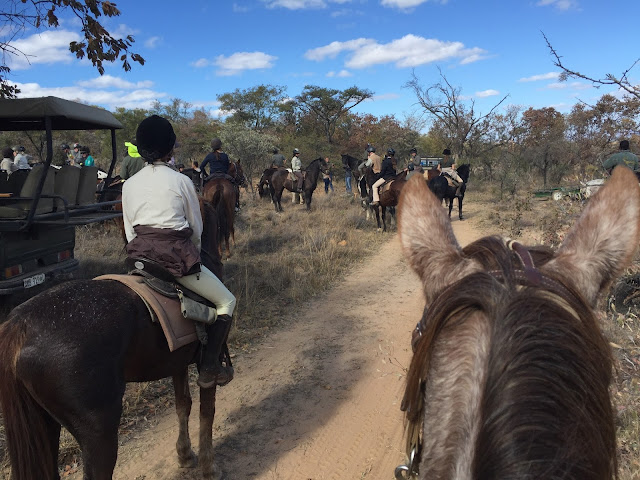 The third and fourth day were filled with buffalo capture.
Ant Baber owns about 40 disease free buffalo, which have great genetics.
Due to the drought and therefore grazing issues, he bought a neighbouring piece of land, which was fixed up to be a new buffalo and kudu breeding camp.

We set out early in the morning and cantered on long sandy roads towads the suspected buffalo herd. Dr. John and Ant were ready to dart- unfortunately a little to quick- as most riders werent quite in position just yet.
The dart went in, the cow ran, and- we lost sight of her.
Stress and panic started, but Ants calm instructions made everyone focused and organized once again. We all splitted up, riding through thick bush and lon grass, in hope of finding the sedated cow. This is a game against time, and as 15 minutes went by, we almost lost hope she would still be alive.
Luckily, the Ant collection has amazing guides which were able to track the cow down. She was laying behind a termite mount in a thicket- almost invisible.

The cow was loaded by 17 strong young men and brought into the new breeding camp.
Afterwards we darted another 2 buffalo, this time with everybody ready and organized. 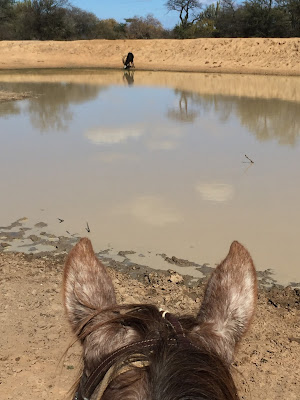 On the last day of game capture it was time for a magnificent giraffe bull to be sold to a farm in the region.
All guests were really excited, as this is the most tricky of all game captures.
Long legs, and a sensetive blood circulation system makes it incredibly hard for giraffes to be safely tranquilized and transported.

The giraffe bull was quickly found and the dart went in. Unfortunately it didnt seem to be strong enough for the big animal.
The bull kept running, and all riders were trying their best to stay with him through a long wild run. Another dart went in, and this time the bull started behaving sedated.

Everyone went onto their allocated positions with ropes to bring the giraffe into a controlled fall.
Due tot he good explanation and demonstration beforehand it all went well.

On the last night of this amazing week, all staff and guests had an amazing „dress into your worst outfit“ party around the fire.
Posted by Christa Panos at 06:40