One Week at uMkhuze

By Tom and Olly

No electricity, no hot showers, no worries. Our week at Mkhuze was basic to say the least but absolutely fantastic. 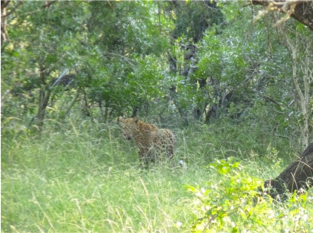 Three students including ourselves and Arlo set off for Mkhuze earlier than the rest of our group to set up camp. After finishing we headed to the pool for a much needed rest, on our way back Paul our training assistant treated us to a brief game drive to see the observation point, little did we know we were going to be further rewarded with an awesome leopard sighting. We managed to catch him/her resting in the shade resting from the heat of the days and he/she posed beautifully for our eager camera lenses. We also spotted a large male white Rhino on reaching the observation point after a brief detour to retrieve Olly’s forgotten camera so he could take photos of the leopard.
We slept well that night despite the calls of Spotted Hyaena echoing round the camp. Blissfully in the morning we awoke to find a lack of mosquito bites on ourselves, we soon realised we hadn’t seen a single one and had stumbled upon a safe haven from these blood sucking manifestations of Satan.

The camp came to life Monday morning when the rest of the Amakentshane group arrived on the game viewers to a 5 star reception. We showed off our leopard pictures but little did we know that other members of our group would be treated to an even better sighting later in the week.
After catching up with the rest of the group we headed out on a game drive, the sheer amount of information thrown our way by the guides (or as we refer to them “walking encyclopaedias”) was enormous. What seemed like thousands of names of birds/trees and bugs brought about the realisation that one day we would hopefully be able to guide like them, albeit a long time away!
In the evening we quickly mastered the use of flashlights as without lights it got dark very quickly, and the odds of walking into trees or taking the wrong path to your hut multiplied tenfold.
On the second day we rose with the sun, and headed out of camp by 5:00am much to the shock of several members of our group. The morning drive was quiet and we found ourselves at Kumasinga hide at around 8:00 for breakfast. Once the cereal was inhaled we entered the hide and had several good sightings of birds to add to our ever growing species lists.
We returned to the environmental camp and spent an evening around the fire eating up a stew made by the student duty team. The darkness made it a lot easier to eat! We were also welcomed to the camp by a resident genet that watched over our fire from the branches of a Lembombo Wattle. 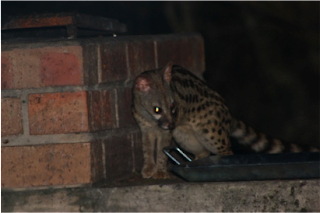 Day three was fantastic however, throughout the morning game drive several acacias were brutally attacked by our guides cutting off branches with their Leatherman’s. It didn’t take Sherlock holmes to figure out what was coming our way, was less than desirable. However we were offered some light entertainment by Wanroe’s odd bird identification, especially his stringy call on a “knob backed lark”. We spent the afternoon identifying those damn saplings. General moaning about how the branches weren’t in the book, or the fact they all looked the same were occasionally punctuated with shouts of pain as people (mainly Brett) stabbed themselves on sharp thorns and spines. This was only the beginning of the hard work….
Day four and so the students take over. This was the first of many days in the Hotseat, as it became to be known. While there we were required to take over guiding duties and show the rest of the vehicle what we had learnt. So we threw in all the information we had gained on birding, trees, mammals, tracks, the park itself and the vehicle we were riding in. We were such good guides we even managed to track down the elusive black rhino in thick bush and show it off to our guides, this is when the student surpassed the master for a few brief seconds.
Later on that day we were taken to the observation point to have a night time astronomy lecture. This was particularly awesome, as there is nothing that can really compete with staring up the stars on a clear night with hyaena serenading us in the background. Nick held us captive with his stories of the heavens and the various mythologies behind them.

Day five marked the end of the week and the resident nicotine addicts in the group could stop thinking about rolling up various types of animal scat into a cigarette and look forward to a proper one when they returned to camp. We had a morning game drive which was mostly uneventful except for a close encounter of the horned kind. One of the guide vehicles was charged by a male white rhino trying to protect his female. They rewarded us afterwards with some stunning photo opportunities. 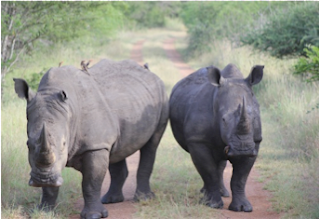 Many of us weren’t too keen to head back as we were very happy to have no electricity over mosquitoes any day.
It was a nice feeling to know that when we next returned we would be on our assessment drives for our FGASA level one qualification and would definitely know tonnes more than what we currently do.
All in all we squeezed every last drop of information and experience that we possibly could out of the week. We would like to give a big thanks to our guides, Paul, Nick and Pieter for blackmailing our tired and weary minds into work for a refreshing pool session at the main camp. 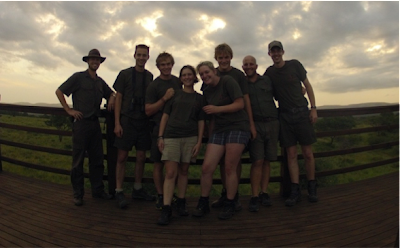 Posted by Bhejane Nature Training at 04:33