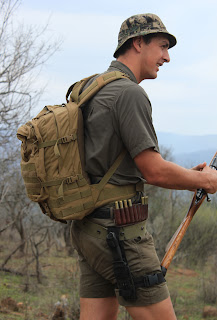 I studied at Bhejane Nature Training from Feb 2012 to June 2012 were I did my FAGASA level 1 as well as my Trails guiding course.

In 2011 I decided I want to change careers. It was time to follow my heart. Like most boys I always wanted to be a ‘Game Ranger’ and now finally I have the opportunity to go and do it. I found out about Bhejane via a friend’s daughter who studied there, so I drove up to Ethaltini bush camp to check it out. After talking to Dylan and Christa and seeing the camp, I knew I was on the right track. At first it was really scary to leave my job at the hospital, but when I look back now, I know I made the right decision to become a field guide.

I had an awesome time doing FGASA Level 1 as well as my Trails guiding course. I made so many new friends and met some amazing people. Bhejane was a excellent start to my new beginning.

When I look back at my time in the Bhejane camp today, the moments that really sticks out for me is our first aid training, it was so well done and all the practical work felt so real, thanks Andrew!! Another think that I won’t forget is that first time on our ARH practical when I shot with the .458 ruger. Wow, what a rifle!!!!
The courses at Bhejane that I did, really provided me with not only the necessary field knowledge, but also the life skills that is needed to be a excellent guide and to really make it far in the industry. I also did my HP course, a snake handling course with Johan Marais and Jonathan Leeming’s scorpion course.

Today I am working at Makhasa Game reserve and Lodge, 15km north of Bhejane in Northern KZN, as a guide and assistant manager.

Let me tell you about my favorite sighting at Bhejane.

We were walking trails at Amakhozi Game lodge in September 2012. The morning of the 18th at about 9 o’clock, we were on top of one of the many hills at Amakhozi. I was walking lead and we just started descending from the top, when I spotted some buffalos at the foot of the hill. They were about 300m away and we estimated that the breading herd was more or less 50 in count. We were walking on the dirt road, as it was the only way down and I realized that this road is leading us straight into the herd. We continued very cautiously and when we were about 100m away from the herd they became aware of our presence. We stopped and watched them for 5min. I then walked ahead to see where this road was leading and luckily right at the bottom of the hill, the road turned to the left, away from the herd. We carried on walking, but when we reached the bottom of the hill, I realized the herd of buffalos is now about 65m away and they are following us. We stopped to see what they were up to and they also stopped. Now almost the whole herd was looking at the 5 of us and one by one the young buffalo bulls were coming closer and closer, 2 steps at a time. By now they were about 50m away from us and my hart is pounding like crazy. We walked on for another 10 paces, stopped and the buffalos were still closing in on us. We stopped and stood our ground. The young bulls are still out in front creeping closer. We stood our ground and had a “stare down” for about 15 min before the herd finally moved off and my heartbeat returned to normal. Sjoe……

Well, I don’t know where the bush will take me in the next years, but I would like to still be at Makhasa, but maybe as manager, with a Level 3 and SKS DG to follow.


Thanks Bhejane!! You guys rock!!

Posted by Bhejane Nature Training at 01:10