My First Day at Bhejane

So after 26 hours of traveling and about 3 hours of sleep the planes wheels touch down in Richards Bay. I was worried i wasnt prepared enough about silly things like, 'had i packed enough or had i packed too much.'
I stood up on the plane, nearly cracking my head on the overhead baggage storage. I looked down onto the seat infront of me and saw a pile of FGASA study books and bird books stuffed into a bag for life. Turned out Sarah, who is on the same course as me, sat right in front of me for the whole flight. My first thoughts were how did she get all those books onto the plane as hand luggage and secondly, secondly, i was both excited and disappointed; excited i wasnt the only English person but kind of disappointed i wasn't.

As i stepped out of the terminal i was literally slapped across the face by the humidity of this area. Hanroe met us at the airport. My first impression was that he was a pretty laid back guy. Later in the car this was reinforced by his music choices, which practically sent me to sleep!

Upon arriving at Bhejane i realised i had it wrong. It was pronounced be-jan and not be-jane like i had been saying it the whole time! My tent wasn't what i had expected. Well actually i didnt know what to expect but i found it  to be perfectly fine as a place sleep, while most our time will be spent in the hut studying.

My fellow room mates! Wanroe and Brett! Firstly with Wanroe sounding a lot like Hanroe and secondly, the odd pronunciation of the 'w', kind of threw me, so i was instantly relieved when he said it was ok to call him 'Van'.

Our first day started off with a tour of the camp, where we got shown around by Jennie and what followed was an incredible cock- up that resulted in a resounding win! We got paired into 4 groups and had to take 5 litre containers to carry around the reserve along with bird books and cameras, while navigating. Being set off at 20minute intervals resulted in a nervous 40minute wait while watching all our fellow comrades leave. I was a little bit worried about how our group would operate after only knowing each other for such a short time. Now saying we got lost while looking for the 'well' is an understatment! The bush had grown so thick we couldn't spot it despite my thrilling heroics of climbing a monstrous tree. After 2 hours of stumbling around the bush we arrived back and had to translate a whole bunch of Latin words, which was interesting and i found it fairly fun. Later that evening while discussing our various interesting endeavours, we heard a loud bang as Van shot from his chair by the bookcase like a startled rabbit. The ceiling fan then promptly occupied his seat! Needless to say his over enthusiastic Afrikaaner side took over, proclaiming how he nearly died and accompanied by countless repetitions of the word, 'brew'! 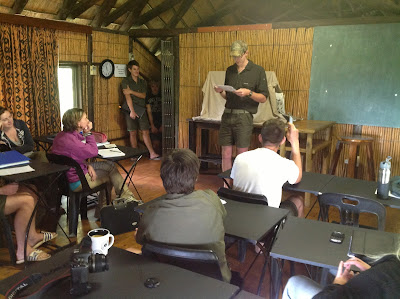 Posted by Bhejane Nature Training at 06:21